Ask the Beavers to create a hypothesis:

What do they think will happen when you place the candy in the water?

Science behind to explain to Beavers:

Why does the M float? Some parts of this favorite candy are water soluble. What does water soluble mean? It dissolves in water of course! Water molecules are able to surround the molecules of the solid and dissolve it into the water.

With this floating M activity, you can see the colored shell of the candy is water soluble. However, the special m is not! As the shell dissolves, the M floats free. 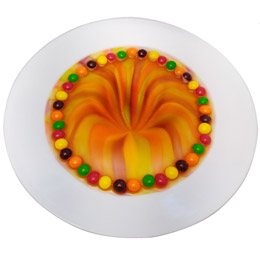 Is The Candy Sour?

Ask the Beavers to make a hypothesis

What do they think will happen to the candy in the water when you add baking soda? Do they think the reaction will be the same for all the candies?

Which candies make the most bubbles?

Science behind it to explain to the beavers..

Since these candies are sour, they are highly acidic and the resulting reaction with baking soda will produce bubbles of carbon dioxide gas.

Will The Candy Bar Sink Or Float?

Ask the Beavers to make a hypothesis?

Which candy bar sinks the quickest?

Which candy bar made it all the way to the bottom of the cup?

Which candy bars float? Or which one sank slowly?

Science behind it to explain to the Beavers

Candy bars that are dense will sink to the bottom of the cup. The density of the candy, however, depends on what is inside the candy.

Candies that have whipped ingredients like nougat, marshmallow, or malted milk will float because their air pockets make them less dense and therefore more buoyant.

Candy that is solid chocolate or filled with peanut butter or caramel will sink because they are denser than the water into which they are dropped.

Dense objects are closely compacted in substance. Like a rock!

Have Beavers work together in their lodge to create the tallest tower out of marshmallows and spaghetti.

After five minutes, ask them what’s working? What is making this task challenging? What is their strategy to build the tallest tower.

Inventing Challenge: Design Your Own Candy

Give each Beaver a piece of paper and colouring supplies. Ask them to invent their own candy.