The Fun Patch Department will be closed Monday, August 2 to celebrate Alberta's Heritage Day. We will reopen, Tuesday, August 3.

During July and August, we are working part-time and shipping orders as needed. If you have an urgent in-stock order that you need quickly, please call us at 1-877-335-8904 and we'll do everything we can to accommodate your request. 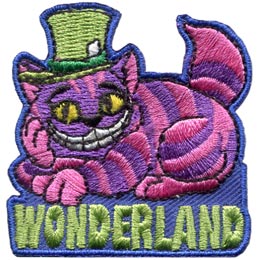 Wonderland - Glow In The Dark (Iron On)

Did you know that there are many theories surrounding the origins of the phrase, ''Grinning like a Cheshire cat?'' One theory states that cheese formerly sold in Cheshire, a county in England, was moulded like a cat that looked as though it was grinning. The cheese was cut from the tail end, so that the last part eaten was the head of the smiling cat.

Another theory boasts that Cheshire had numerous dairy farms; hence the cats grin because of the abundance of milk and cream. Show off this glow in the dark Wonderland patch and start sharing your theory on the origin of this phrase?

I received my order today. I love the vibrant colours and detail. So beautiful and fun! Can't wait to give them!

Thanks very much for my patches. This was the second order I placed. I was so impressed with the looks and quality of the first had to order more. My grandchildren will receive a patch each time they go camping with us making it an added fun experience.

Just a quick note to let you know that they turned out AMAZING. You were such a pleasure to work with.

Customers who bought Wonderland - Glow In The Dark also purchased

Do you have something that you would like see on a badge? Add your crest design suggestions to our wish list.