During the summer, we are working part-time and shipping orders as needed. If you have an urgent in-stock order, please call 1-877-335-8904. 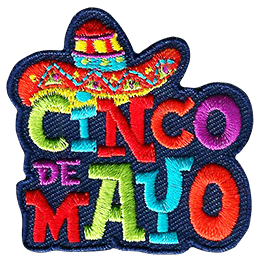 
Celebrate Cinco de Mayo on May 5!

Cinco de Mayo commemorates the anniversary of Mexico's victory over the French Empire at the Battle of Puebla. Cinco de Mayo is Spanish for the Fifth of May, causing some people to mistake this special day for Mexico's Independence Day. In the United States, this Mexican holiday is a celebration of Mexican-American culture.

Thanks so much for sending the order with Kathy. That so made my day. The Sparks are off to the Stettler train this Sat. They will be receiving 5 crests on this trip. It will be so exciting. They love getting the crests. Thanks so much for an amazing site to purchase crests.

Hi Lori, Just wanted to let you know that we received our patches and we love them! Thanks for doing such a great job, they were worth waiting for.

I usually make up a sketch of what I kinda think I want. Then I send it to Lori at e-patches, and she makes it look really good :) Lori has this amazing ability to take my ridiculously vague sketch and make it look exactly what I vision. [This] really sums up one reason of why I always use e-patches :)